What if the United States had been a member of the Euro area?

Paul Krugman responds to my earlier post about how exchange rate regimes do not matter much (I was referring the work of Andrew Rose). Krugman has a different view on the issue and argues that countries in the Euro area have suffered from not having their own currency and this is visible by the higher interest rates that they faced relative to other countries. He makes a good point and the data speaks in favour of his hypothesis. I also think that Euro countries have suffered from being part of the Euro area because of many other reasons (e.g. they ended up adopting the wrong policy mix). Where I am less sure is about how much the ability to control the exchange rate mattered relative to other factors.

The only way to understand these effects would be to build a counterfactual: what would life without the Euro have looked like for these countries? I have tried to answer this question before and it less clear than what some might think. As an example, for those who see the current levels of unemployment in Spain as an example of the negative effects of not having your own currency, it is important to remember that job creation or unemployment in Spain look substantially worse when Spain had its currency (1980-1999) than since Spain has been a member of the Euro (1999-2013).

Let's build other counterfactuals just for fun: first, what if US economy had been a member of the Euro and, second, let's have Ben Bernanke running the central bank of a hypothetical Euro country that decides to leave the Euro area or did not even bothered joining the Euro (say Greece, that's the origin of the not-so-smart title for this blog post).

Let's start with the US economy being part of the Euro area. Of course we need some assumptions about the role that the US would be playing in this enlarged version of the Euro area. Imagine the US played a similar role to a small country in the periphery (Greece, Ireland or Spain). The ECB is still in Frankfurt and run by the German central bank ideology. Prior to the crisis it is very likely that the US would have seen an even larger inflow of capital from other European countries because there would be no exchange rate risk within the Euro area. So, for example, institutional investors or financial institutions in Germany would have invested even more of their portfolios in the US given that there would be no exchange rate involved (in some cases regulations limit the amount of exchange rate risk for these institutions). It is possible that this would have made asset prices in the US increase even further than what they did in the run up to the crisis and possible have the US run an even larger current account deficit. In other words, the imbalances that led to the crisis would have possibly been much larger.

Once the crisis started, there would be no room for depreciation of the exchange rate but if one looks at the data, the US dollar did NOT depreciate when the crisis started. The other way around, it appreciated relative to the Euro and other currencies. 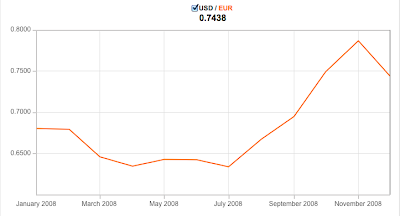 It is very difficult to know what the Euro would have done if the US had been a member of the area, it is likely that it would have appreciated relative to other countries (because there would be no USD), but what seems plausible is that relative to the actual data the US would have seen a lower loss of competitiveness if it did not have its own currency (not sure how much that would have mattered but just trying to get some facts right). So this could have been good news for the US [This is coming from the fact that when your have your own currency some times it moves in the opposite direction than what you would like].

What about interest rates? Given the strength of the US economy one would have not expected the US becoming part of the periphery so interest rates would have remained low (as in Germany). But clearly, the large current account deficits that would have preceded the crisis could have put more pressure on the US than on a country like Germany that had large surpluses. The potential negative effect for the US would have been that membership in the Euro area would have made the pre-crisis imbalances worse possibly leading to more risk in terms of funding when the crisis started. This is my reading of what has happened in the Euro periphery: one the biggest cost of the Euro membership was the bubbles that the Euro facilitated in the years before, not so much the inability to adjust via exchange rates after the crisis exploded.

Here is my second scenario: let's have a Euro periphery country leave the Euro (or never join) and have monetary policy follow the policies that Ben Bernanke has followed in the US (bring interest rates down to zero, aggressive quantitative easing). The ECB has already followed some of these policies so there will be some similarities but the fact that now this country would be managing its own currency would bring some additional effects. The currency would likely depreciate and that should help exports. How much is less obvious. The effects of exchange rates on exports or the trade balance is not easy to measure - as a comparison during the crisis the UK saw its currency depreciate relative to the Euro but the performance of exports was clearly weaker than that of similar countries such as Spain that did not have their currency.

And what would happen to capital flows? It is likely that capital will flow out of the country, given that the country started with a current account deficit this would be a problem (dealing with a sudden stop is never easy). If debt is denominated in foreign currency the situation could be dramatic (as in the Asian crisis in the 90s). But even if debt is denominated in local currency there is still an issue: there is the need to finance a current account deficit and in the absence of capital inflows it would lead to a collapse of internal demand. Yes, exports might be increasing but it is hard to see that this adjustment would be fast enough to compensate for the immediate correction required given the lack of funding. Unless the rest of the world is happy holding more of our currency, in which case we can finance our expenditures via monetary expansion. But for Euro periphery countries their credibility of their currency is of course not where the US dollar is. A sudden stop would require liquidity from external sources (IMF or other governments) to avoid an economic collapse. Not too different from what Euro periphery countries had to deal with as members of the Euro area -- except that as members of the Euro area they had more negotiating power because the other countries (e.g. Germany) were really scared of the idea of a break up of the Euro area.

The message from these two scenarios is that we are dealing with a complex question where there are potentially many effects going in different directions. No doubt that the policies that Euro countries have adopted during the crisis have very likely exacerbated the negative effects of the crisis (in particular the slow reaction of monetary policy and the contractionary nature of fiscal policy).  But if any of these countries had been outside of the Euro area they would have struggled with other issues and the outcome might not have been too different. The biggest benefit I see of having stayed out of the Euro area is that the capital flows that fed the pre-crisis bubble would have probably been smaller and maybe made the crisis more manageable.

So the US, the UK or Japan offer some interesting lessons to Euro countries about the virtues of being able to manage your own currency and monetary policy during the crisis. But I think that those lessons are not easily applicable. Not every country has the credibility of the US or the UK to maintain capital flows during and after the crisis allowing for a slow adjustment in the current account. Japan starts with a current account surplus and a very strong home bias when it comes to the funding of the large government debt so the notion of a sudden stop does not apply. So currency regimes matter in significant ways but the effects go in different directions and measuring the net effect is not easy. In addition, this effect can be very different for different countries or periods so it is hard to generalize. The paper by Rose provides a way to measure these effects by analyzing a large sample of countries and shows that there are no significant differences in performance across different exchange rate regimes. It is a good starting point of a debate that is complex and likely to continue over the coming years (or decades).

The Healthcare Management Initiative at INSEAD was founded on the belief that many of the systemic challenges of the healthcare...