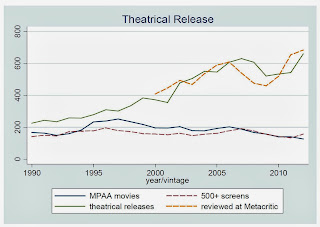 File sharing and piracy reduces studio revenues and prevents firms from recouping the ever larger investments needed for the production of new releases. As such, piracy is claimed to 'kill' innovation and creative production, which will ultimately hurt consumers. The industry has been heavily lobbying for stronger protection from piracy. In a new paper, Joel Waldfogel of the Carlson School of Management argues that technological development has massively declined the cost of producing new movies. Moreover, the same developments that allow massive file sharing also made the discovery of new movies much more effective, thereby substantially reducing the total cost of a new release. This effect counteracts the detrimental impact of piracy and may actually result in an increase of releases and innovation in general (similarly to what happened in other creative businesses, namely music and books). Using IMDb data, the paper shows that this indeed seems to be the case. Since 1990 the annual number of US features and documentaries produced has increased by more than five and ten times, respectively. Moreover, while the number of new releases from the major Hollywood studios hasn't really changed, independent movies make up a large and growing share of what succeeds in the market. The new vintages of movies are far from being of low quality and there is evidence that they are appealing to audiences and critics alike. The movie industry seems to be in better health than ever!

INSEAD takes your privacy very seriously. For this reason, we inform you that the data collected via the form above is processed electronically for the purpose(s) specified in this form and will not be used outside this framework. In accordance with the Data Protection Act of 6 January 1978 amended by the GDPR, you are granted statutory rights of access, modification, update, deletion and limitation of treatment of your personal data. You may exercise these rights at any time by writing or sending an email to INSEAD at insead.knowledge@insead.edu. You have the right, on legitimate grounds, to object to the collection and processing of your personal information. For more information, please see our privacy policy.

The Healthcare Management Initiative at INSEAD was founded on the belief that many of the systemic challenges of the healthcare...