First, we keep forgetting that we are talking about nominal variables and they will keep setting record levels as long as inflation remains positive. But I am also less worried because tightening of monetary policy normally happens when growth is picking up so the stock market will have to decide if it prefers faster growth to higher interest rates. And the reaction might surprise some.

A historical example that I have mentioned earlier and that I find interesting is the period 1993-1996. In 1993 the recovery from the previous recession was slowly taking shape and the stock market was going up and, yes, setting all-time records. What did the newspaper headlines say at the time and also in anticipation of a future when monetary policy was about to get tighter? A quick search in Google reveals the following headlines:

Whatever else might be wrong with the U.S. economy, the stock and bond markets of Wall Street are thriving on the strength of falling interest rates. Sluggish job growth, subdued consumer spending and worries about how the nation will fare in an increasingly competitive world have not stopped the steady advance of stock prices to record highs. Fort Worth Star-Telegram. August 26, 1993.

Stocks climb to a record Surge in bonds, lower interest rates are behind it. It was the Dow's fourth record close this month. The Associated Press, August 20, 1993.

Jump in interest rates sends shiver through bull market. The bull market that carried blue chip stocks to record highs last week may be running out of steam - and the next move could be nasty as small investors try to get out of the market, analysts say. Indeed, there is concern on Wall Street that the record flow of money into stock and bond mutual funds has created a potentially dangerous situation. Signs of market fragility reappeared Friday when a jump in interest rates on the bond market triggered a selloff in stocks. The Washington Post, May 30, 1993.

A lot of these headlines look identical to the ones we read today. What happened in that historical episode can be seen in the chart below where I compare the evolution of the interest rate (Fed Funds Rate) with the Dow Jones Index (click for a larger image). 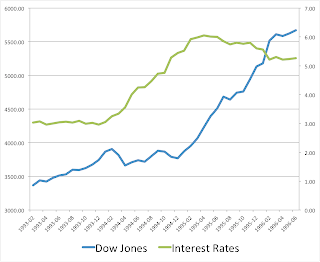 I have no reason to expect the same behaviour in the stock market this time (and given what happened after 2000, it might not be a desirable outcome), but these years serve as an illustration of how markets reacted positively to a significant reversal in monetary policy. Initially there was uncertainty and weakness in the stock market but it was later followed by strong optimism even if interest rates kept going up.

W. Chan Kim and Renée Mauborgne are Professors of Strategy at INSEAD and Co-Directors of the INSEAD Blue Ocean Strategy...